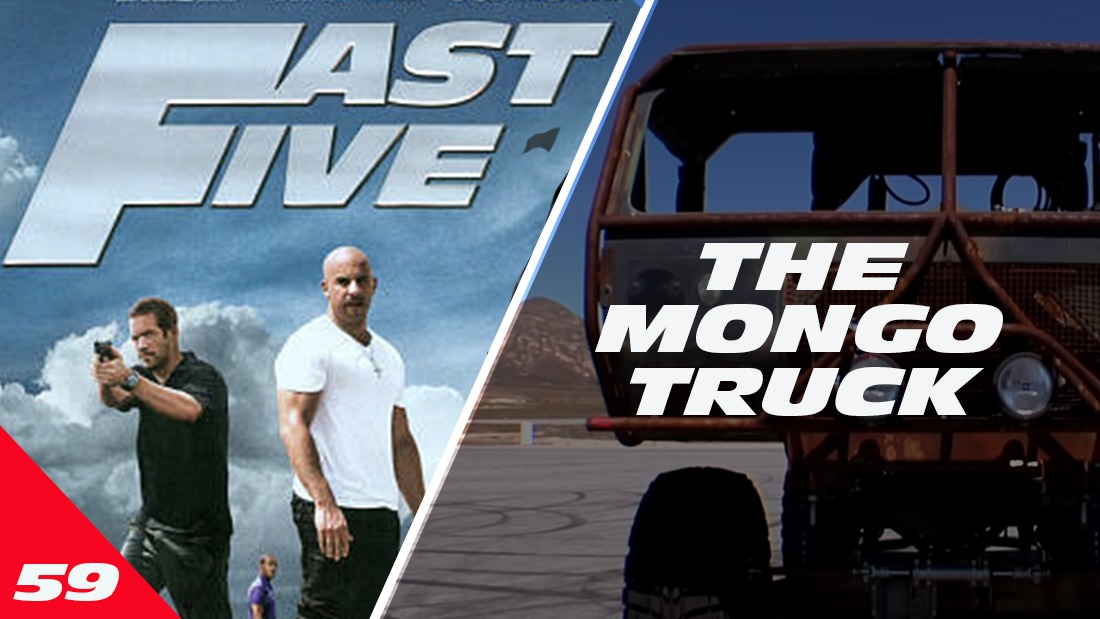 Hello again, Fast fans, Craig Lieberman back with ya. This week, I’ve answered the many requests to learn about this vehicle.

Riddle of the day: what’s old, rusty and goes anywhere it wants?

It’s the Mongo truck from Fast Five. Officially dubbed the Heist Truck, it was yet another creation from Dennis McCarthy’s brilliant picture car team, and this thing was purpose-built to reek havoc.

By Fast Five, all semblances of the street racing culture in these movies have been cast aside in favor of heist movies.

As was the tradition with Hollywood’s Picture Car industry, tuner cars were cast aside in favor of big ole, V8 muscle cars and trucks.

Cause we Americans love them, there big block Chevys, small block Fords and pick em up truck.

The result? Universal stopped building show cars for these movies and started building all the cars pretty much as stunt cars. In other words, they would be these cars with whatever stunts they had planned for them in mind.

The build plan basically followed the action sequences written into the script.

In Fast Five, Universal needed a way to hijack and offload cars from a moving train.

Since no production vehicle could do this, It was decided to build this vehicle basically from scratch, like a Frankenstein of sorts, because of these requirements.

They started with an old Oshkosh HEMMTT, which stands for Heavy Expanded Mobility Tactical Truck. In other words, a vehicle that will flatten Antifa protestors, crush cop cars and pretty much make a road where this is none.

The Oskosh cab was sourced from a Marine Corps surplus auction and they then put another $80,000 in supporting components into the build.

This vehicle needed to be big enough to carry a car on its back. It also needed a deck height that matched that of the train. It had work on dirt roads and on pavement. It had to have serious horsepower and it had to be able to handle some significant jumps.

Filmed in Arizona, this Heist Truck chases down a speeding train on an adjacent dirt road. Since the dirt road wasn’t go to be a flat, smooth surface, this thing would need to be rugged. Add in the consideration that it would jump a berm or two, it would need to be nearly indestructible.

The Oskosh cab would be mounted to the frame, then surrounded by a tubular exoskeleton which was not only easier than installing a cage on the inside of the cab, it gave Mongo a more sinister look.

The engine sits just behind the cab and the second engine is mounted under the platform.

The engine is an interesting story. So in this particular truck, the engine behind the cab is actually a plastic replica of a GM RamJet 502-cubic-inch big-block V8.

But the real under the plastic cover engine is a real GM 502 making about 500 horsepower.

Behind the cab is an 18 foot long, sheet metal platform with cable winches for pulling the cars off the train and onto the platform.

Mongo was built with a custom built Monster Truck style suspension, the heart of which is a set of huge four-link setups using Fox Racing coil-overs attached to a Dana 60 axle up front and Dana 70 axe out back.

This gives Mongo’s suspension 12 inches of travel up front and about 20 inches out back.

46 inch Mickey Thompson Baja Claws are wrapped a set of 19 and half inch custom made wheels.

Although this thing LOOKS like a 4 wheel drive, it’s not. There’s just a mock diff cover on the front axle to give Mongo the appearance of a 4WD.

Steering is handled by a hydraulic ram because of the vehicle’s weight and dimensions. This thing weighed all of 9,000 pounds and if you’ve driven one these trucks, you’ll know how much you feel the weight of it.

Ten of these trucks were produced and that one that Dennis shows in this video was the jump truck.

With Cory Eubanks behind the wheel, this actual truck pulled off jumps reaching about 25 feet high and 75 feet long.

It survived each of the jumps both in rehearsal and in the movie, and successfully drove away from the stunts with minimal damage.

Ultimately, six of these trucks survived the rigors of filming.

The finished sequence was amazing and although I detail this entire scene in anther video, let me touch upon it again.

Universal purchased and actual train and section of unused tracks on which this train could run. The sequence cost $25 million to produce.

The Mongo truck is tasked with getting cars of the train. Vince, Mia, Dom and Brian are carjacking a Pantera, a Ford GT and the Corvette roadster.

In the midst of all this, a fight breaks out and Brian ends up clinging to the back of the Mongo truck.

With Mongo’s driver now ejected from the truck, Mongo is a runaway truck headed for the train.

To get the truck to crash into the train, the traditional cable and pulleys gag was used. Essentially, the truck is attached to a cable and pulleys propel the truck forward. This is somewhat similar to how fighter jets are launched off an aircraft, except that catapults are powered by a steam piston.

Anyway, Mongo hits the train at about 60 mph, which was brave considering that the stunt team really didn’t know exactly what would happen. In fact, the impact was more severe than they anticipated and it was only by the slimmest of margins that the train wasn’t derailed.

Even in the finished film, you can see that when the train is hit, it comes perilously close to derailing.

If the train had derailed, it would have been a disaster. They would’ve had to bring in huge cranes to right the locomotive – no easy job considering that a locomotive weighs about the same as a 787 airliner on take off (about 450,000 pounds).

Putting a locomotive back on the tracks would have taken several super heavy lift cranes to be transported to the Arizona desert.

Once again, Universal’s production team did their homework and with a little luck, averted what would have been a significant delay.

So what happened to these trucks after the movie?

Details are sketchy. Allegedly, at least two were sold and repurposed for the movie Death Race 3, which was released in 2013, about two years after Fast Five’s release.

If you didn’t see Death Race 3, you’re not alone, because it went straight to DVD and made $8.4 million on a $6.5 million dollar budget.

Last I heard, a couple of these trucks were still in Universal’s possession. The others might have been scavenged for parts.

I can’t say for sure because Universal has essentially embargoed the release of any information on these vehicles, so if you know of someone who has purchased one of these trucks, drop me a message in the comments.

That’s a wrap for this video. I’ll be back next week so if you’re enjoying my content, please consider subscribing.