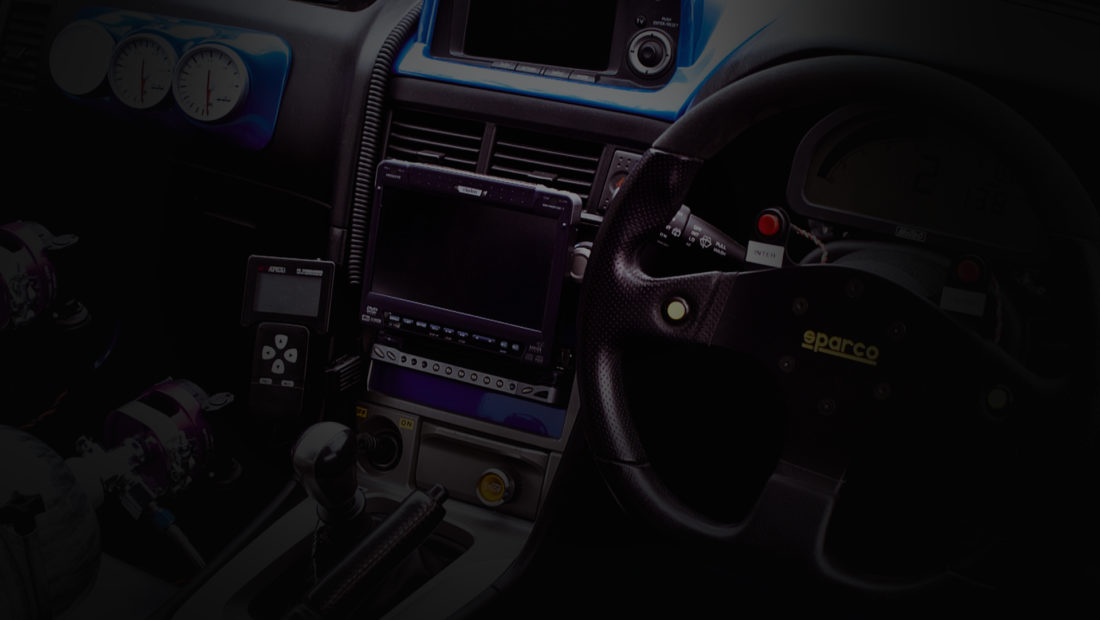 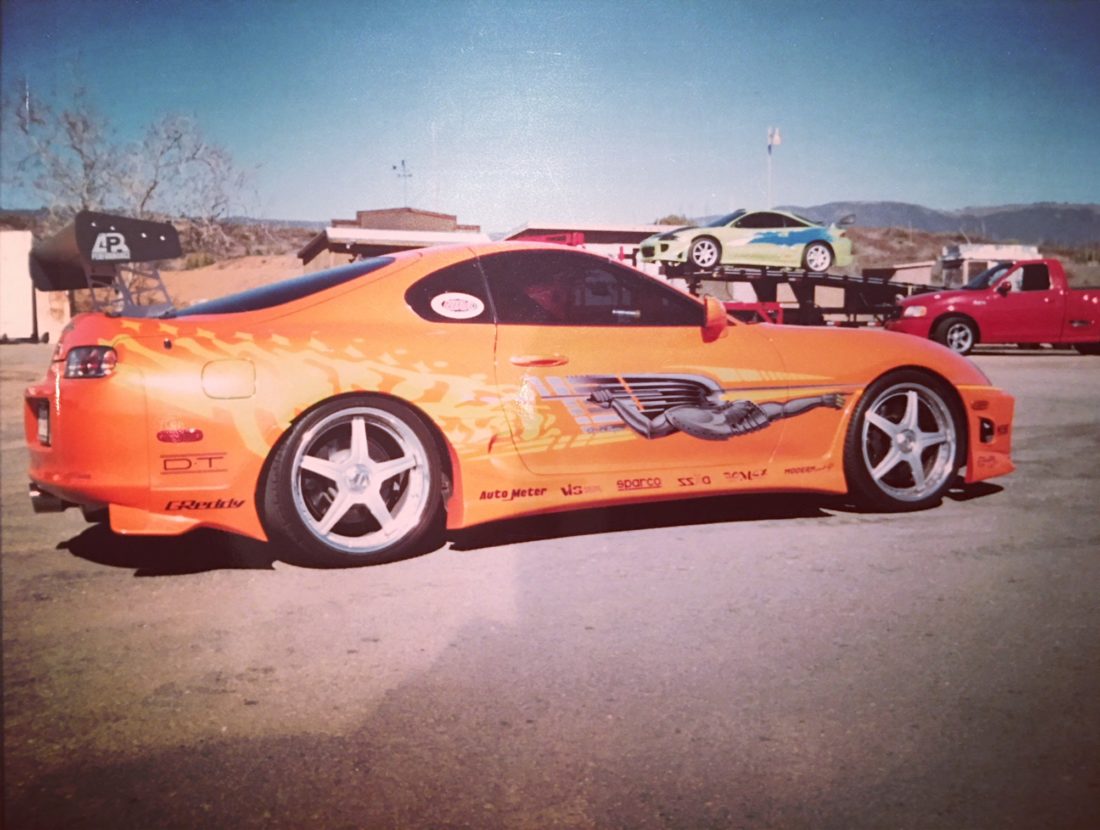 If I had a nickel for every time someone asked me how they could replicate the Fast and the Furious engine sounds, I’d be a billionaire. Or at least, it sure seems that way.

Without question, the sound effects used for the cars were a big part of the reason these movies have become cult classics. But before you get all fired up and try to go out and replicate any particular cars’ sound, you need to know a few things.

It was always fascinating to me how many people asked about how they could get those Fast and Furious engine sounds for their own car. Obviously, you can never make a Honda sound like a Supra, but for those people who the same make and model of car that we used in the movie, the desire was very real. In fact, it’s still real today.

The Fast and Furious Engine Sounds Were Mostly Faked

While it’s absolutely true that Universal went to great lengths to get authentic sound recordings of the cars, the final edit include many other layers of sounds added on top of the sounds of the cars. The Sound Department (or Foley Department) has the task of creating sound effects for movies. In fact, it’s virtually an art. This video is very interesting and shows how it’s done.

Sound effects are comprised of many layers of sound tracks, each one recorded separately and then “mixed” together to create the final sound track. If you’ve ever seen how DJs mix tracks together, you’d have a basic understanding of what’s really going on.

Having observed this first-hand, I was shocked to learn that the Sound Department for the first movie might use things like growling lions, tigers, bears, or things like rocket engines, diesel motors and vacuum cleaners to get the sounds they wanted.

Producers and Directors are not always involved in this process, called “sound design” and it’s typically left up to the discretion of the sound design department. If there’s one thing you can count on, it’s the fact that these men and women are talented artists. They ALWAYS do TONS of research. Like everyone else in the production process, they want to make their mark and so they go to great lengths to produce stupendous sound tracks. 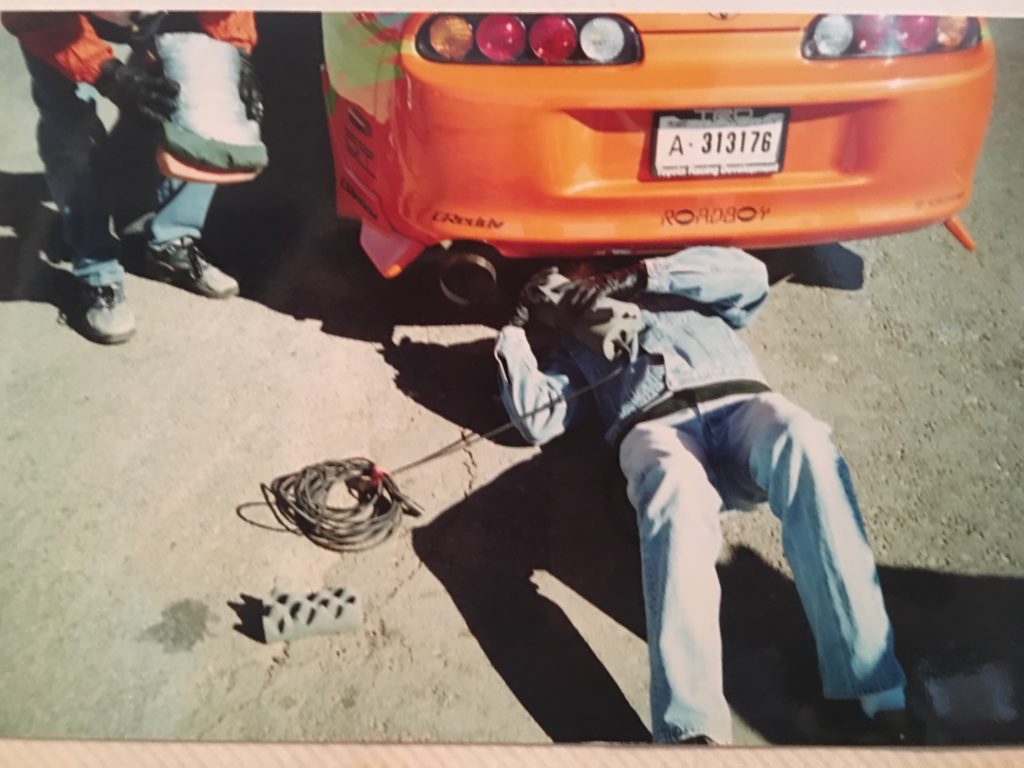 Microphones were attached near my exhaust, inside the rear hatch area and under the hood, next to the blow off valve. With special protectors over them, the wind noise was filtered out.

They Started By Really Recording the Cars

It’s no secret that Universal spent a great deal of time recording the sounds of the main cars we used in the first movie. What you don’t know is that some of the cars didn’t sound very impressive. For example: the Hero 240SX, the Hero Eclipse, the heist Honda Civics and many other cars had bone-stock or nearly-bone-stock engines. Recording them would have been a waste of time.

What did we do? We went out and found cars that had appropriately modified motors and recorded those cars. This was a process of trial and error and many of the recordings had to be done with two cars or more to get the right blend of sound.

Here are some highlights:

Of all the cars recorded, my Supra’s recording was the most accurate. My Supra was fairly modified and the sound design team didn’t have to do much to get it the way they wanted it.

My Skyline GTR was not heavily modded and so we used a blend of engine sounds – some clips of an RB30 with a single turbo and lopey cam, blended with some 2JZ and other effects to get the car to sound beastly.

The RX7 was a mix of many things, including a 2JZ single turbo car.

And so it went. Despite spending a couple of days at a deserted runway making high speed and low speed passes in a bunch of cars, the sound design people would still go back into their studio and edit to their heart’s content.

Sound is in the Ear of the Beholder 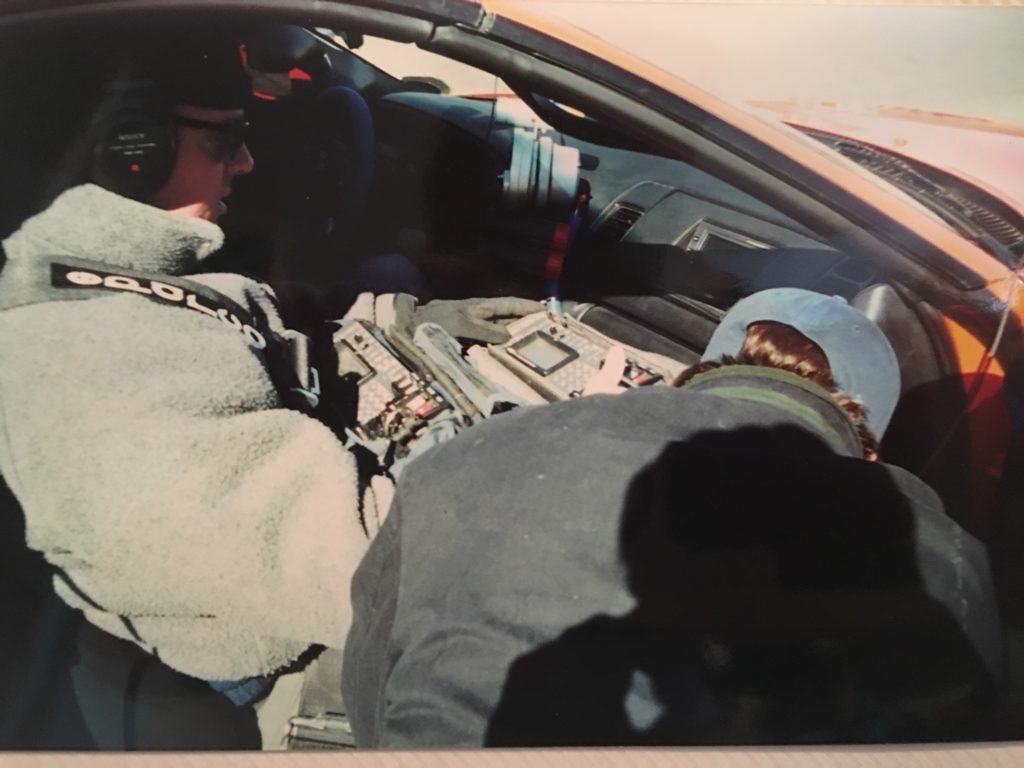 Every human being hears sounds differently. Your ears hear in different ranges and sounds are interpreted by each individual’s brains in different ways. Different people really do sometimes hear the same sounds in entirely different ways. This is a scientific fact.

Even the smallest differences in our individual skull structure or bone density can change the way our brain receives and processes sound waves, changing the frequency that our bones vibrate at as we hear sounds. Therefore, two people can listen to the same car and hear entirely different sounds. This is why some people think one car sounds like shit and many other people like the sound of that particular car. It’s subjective and therefore, subject to personal preferences.

Back in 2000, sound technicians were using dual Digital Audio Tape recorders (aka DAT) to record sounds. In this picture, a sound guy rides along with me as I go up and down a runway at up to 140mph. His job was to do one thing: watch the recording meters to make sure we don’t go in the red. Motion sickness becomes a real problem after awhile.

Again, these men and women, sometimes called Foley Artists are just that – artists. It takes a team a very long time to learn their craft.

Creating the Fast and Furious engine sounds may seem like an impossible challenge, but these folks were very good. How good? People are still talking about this in 2018, nearly 20 years after they did their jobs.

Getting those Fast and Furious Engine Sounds Exactly Right

Forgive me when saying this, but I have to laugh a bit when people DM me on social media and want to know every single spec on my cars so they can “copy the sounds exactly.” The truth is that while I can give you car specs all day long, you still won’t come close to replicating the sounds.

That’s because the sounds were edited so much in post production, it’s just not possible to replicate those sounds with bolt-on parts. Maybe you might think you can get close, but if you were looking at side by side recordings of your car and the final cut of the movie cars’ sounds files, you’d see a lot of differences in the frequencies. Not to mention that everyone hears sound differently, so in the end, it’s a colossal waste of time and money.

However, in some cases, you can get kind of close, relatively speaking – at least with some cars.

Replicating my Supra wouldn’t be too hard using the right parts and replicating my Maxima would be easy, because the sound files for those two cars weren’t touched too much.

For my Skyline, it’d be tougher, unless you want to spring for an RB30 with a big lumpy cam and a fat, single turbo. Most normal humans can’t afford that. And the trick here is that in different scenes where my Skyline appeared, they used different sound recordings for the Fast and Furious engine sounds.

Beyond that, most of the main cars used in the first two movies were lightly modified and as such, sound recordings came from multiple cars and other sources to get the final sound tracks. Again, that makes it extremely difficult to mimic a sound when you don’t know what was used to create it.

How Engines are Built Determines How it Will Sound

For those of you who truly want to know what dictates on an engine will sound, the answer is – most of the influence comes from how the motor was designed and built. This great video explains the concept in simpler terms, along with some back to back video clips to serve as real-world examples.

Of course, aftermarket parts like blowers, turbos, cat-less down-pipes, muffler construction and size, exhaust tube routing and design, camshaft profiles, blow off valves and many, many other things play a role. So getting that Fast and Furious engine from any car, even if it’s the same year, make and model of a movie car, is a daunting task. Again, since we used different engines than some of the Hero cars were running, that’s going to be all but impossible.